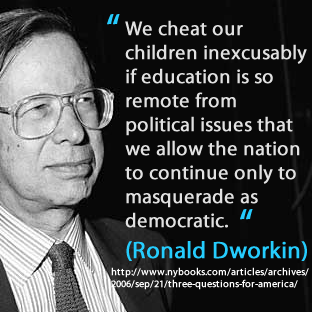 The following is an excerpt from an article entitled “Three Questions for America“, written by the late Ronald Dworkin.  The excerpt helps explain the purpose of this blog, which is to promote the collaborative development of a new school civics course that helps all students develop the necessary knowledge, skills, and dispositions required to take an active and informed role in their communities.

When President Bush said that intelligent design should be taught in the schools, his science adviser, John Marburger, said that Darwinian theory is “the cornerstone of modern biology,” and that Bush meant only that “students should be taught that some people have suggested that Intelligent Design is a viable alternative theory.”
If so, we should welcome Bush’s suggestion, but not for courses in science. Instead we urgently need to make a Contemporary Politics course in which such claims can be discussed part of every high school curriculum.

I do not mean civics lessons in which students are taught the structure of our government or history courses in which America’s story is recounted. I mean courses that take up issues that are among the most contentious political controversies of the day, including, for example, the case for and against abortion; affirmative action in public education; the role of money in politics; the fairness of the tax system; and the role of civil liberties in shaping and limiting antiterrorist activities. The dominant pedagogical aim must be to instill some sense of the complexity of these issues, some understanding of positions different from those the students are likely to find at home or among friends, and some idea of what a conscientious and respectful argument over these issues might be like. The dominant pedagogical strategy should be an attempt to locate these controversies in different interpretations of principles the students might be expected themselves to accept: for example, the principles of human dignity that I believe are embodied in the Constitution and are now common ground in America.

The courses might well include an examination of classics of Western political philosophy from both the conservative and liberal traditions so that students could gain some understanding of the ideas of Aquinas, Locke, Kant, Rawls, and Hayek, for example, drawing on secondary sources and explanatory texts if necessary. The materials and teaching must be geared to the abilities of high school students, of course, but I believe that we are more likely to underestimate than overestimate those abilities. People who can master the intricacies of peer-to-peer file sharing through the Internet should have no trouble with the Categorical Imperative; indeed some study of the latter might help them in deciding whether the former is fair.

Contemporary Politics courses would be extremely challenging and difficult to teach, particularly unless and before some broad consensus had developed among teachers and in schools of education about how they should be taught. Teachers would have to steer between anodyne banality and indoctrination and they would have to recognize that the first of these failures is as much to be avoided as the second. But think how much it would improve our politics if students leaving high school had some understanding of the reasons why a deeply devout person might nevertheless prefer a tolerant secular state to a tolerant religious state, or why an atheist might think that public celebrations of religion were appropriate in a nation the vast majority of whose members were religious. Or if those students had been asked to consider what differences were morally permissible in a state’s treatment of citizens and aliens who are arrested as terrorist suspects. Or if they had actually read and debated the opinions of Justice Margaret Marshall and Chief Judge Judith Kaye in the Massachusetts and New York gay marriage cases and, if they disagreed with those opinions, had been challenged to say why. Or if they had been invited to consider what made a theory scientific and whether the intelligent design theory of creation met whatever standard for classification as science they considered appropriate.

I know, of course, that this suggestion bristles with possibly insuperable political difficulties. The selection of texts would be intensely controversial and the danger of manipulation by local political and religious groups very great indeed. It would be much easier for everyone—school boards, school principals, and teachers particularly—if nothing like this were attempted. But we cheat our children inexcusably if education is so remote from political issues that we allow the nation to continue only to masquerade as democratic. The idea that public education is a school for democracy is certainly not new: it was at the center of John Dewey’s enormously influential educational philosophy. What is new in this suggestion is only its specificity about content and its high ambition; but that is driven only by a more realistic opinion of what genuine democracy needs and the cost we pay in legitimacy so long as we fail to provide it.