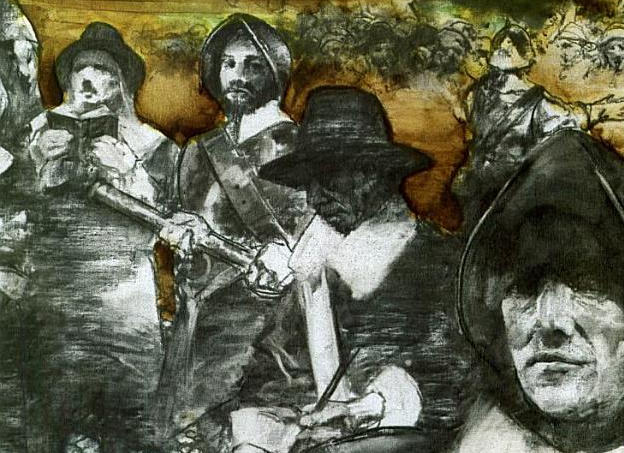 The Silencing of Mary Dyer

Learn more about Mary Dyer and Anne Hutchinson by clicking here to read the Teaching Tolerance article, “The Silencing of Mary Dyer“.

See if you can answer the following quesitons:

READING VOCABULARY–Use a dictionary to define the following words.  Keep in mind that the definition needs to make sense in the context of the reading.
Tyranny, Scurvy, Slander, Radical, Denounced, Blasphemy, Reprieve

Answer the following questions after you have read the story.  Use complete sentences!!

1.  Why was the church so important to members of the Massachusetts Bay Colony?

2.  What lead Mary and her husband to question their church?

3.  Describe the rules the church imposed on members of the colony.

4.  Analyze the effectiveness of a government that imposes such rules on a group of people.  Why do you think they were so strict?

5.  What were Anne Hutchinson’s views of the church?

6.  What action did Anne Hutchinson take in support of her views?  Analyze the effectiveness of her actions.

7.  What did Mary Dyer do to support Anne Hutchinson at her trial?

8.  How did Governor Winthrop react to the new ideas Mary and Anne were supporting in the colony?

9.  Why did Gov. Winthrop think it was so important to keep tight church control in the colony?

10.  What did Mary and her husband do after Anne Hutchinson’s death to continue to support their ideas?

11.  What colony enjoyed a high level of religious freedom?  Why was Mary Dyer still not completely satisfied with this colony?

12.   Where did Mary travel to and whom did she meet.  How did this meeting effect her religious beliefs?

13.  Why did Governor Endecott of the Massachusetts Bay Colony banish all Quakers?

14.  What happened to Mary and her husband upon their return to the colony?

15.  Describe some of the punishments inflicted on Quakers who would not leave the colony or abandon Quakerism?

16.  Describe in detail what happened to Mary on her third trip to Boston in 1659.

17.  What finally happens to Mary after Gov. Endecott comes to speak to her in prison?